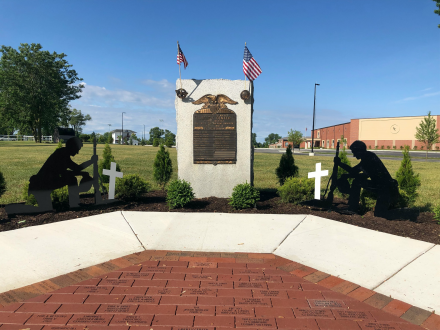 Garmann/Miller worked closely with the Liberty Center Local Schools’ administration and staff as well as the local community to gain valuable input to the design of its veterans’ war memorial.

During the planning process to build the district’s new K-12 school, which took place from 2014 to 2018, it was determined that the war memorial on the corner of the old gymnasium would need to be removed and renovated. GMAE redesigned the new memorial, but due to other project priorities, the district would need to rely on other resources for funding.

The community saw its importance and gave an outpouring of local support to make sure the project was executed.

- Ron Foor of Northwest Landscape in Napoleon, Ohio, agreed to stand by his bid for the landscaping portion of the project.
- Toby Fitzenrider of Dutchmen Construction donated the labor and concrete for the remainder of the project.
- The local VFW donated the kneeling soldier silhouettes.
- The Liberty Center Education Foundation held a paver fundraiser for the walkway.

As we look forward to celebrating Independence Day, it’s nice to reflect on projects that honor America’s history and its heroes. Please take a moment this Fourth of July to appreciate those who fought for the freedoms we have today.